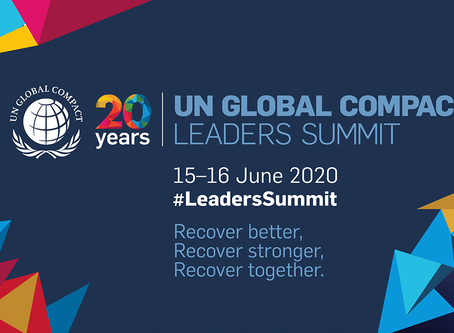 Nairobi, 16 June, 2020 —  The Leaders Summit marked the transition to new leadership for the UN Global Compact, with Sanda Ojiambo of Kenya taking over from Denmark’s Lise Kingo as Executive Director.

Over 26 hours of continuous virtual programming — including more than 100 global, regional and local sessions — the Summit was the UN’s largest, most inclusive and most sustainable convening of purpose-driven business leaders committed to tackling societal challenges and advancing the Sustainable Development Goals (SDGs). More than 20,000 business and sustainability leaders from over 180 countries participated in their local time zones and languages.

Under the theme of “Recover Better, Recover Stronger, Recover Together,” the event marked the 20th anniversary of the UN Global Compact, providing a platform of platforms where leaders from business, civil society, Governments and the UN were challenged to reflect on the importance of collaboration and public-private partnerships, and increase their ambition to achieve the SDGs.

“I am encouraged to see so many companies, of so many sizes and from so many sectors and countries, recognizing the urgent need for global unity and international cooperation. Our shared aim is to see businesses integrating the Ten Principles of the UN Global Compact into their core strategy and operations, taking strong steps to support the SDGs, and reporting publicly on progress,” said UN Secretary-General António Guterres in his opening remarks from UN Headquarters in New York.

Reflecting on five years of leadership as the UN business chief, Ms. Kingo said “The Ten Principles and the SDGs must inform every decision and action — big and small, in every part of business. All the way into the supply chain. We need many more businesses to adopt this approach, so it becomes the new normal.”

“While the COVID-19 pandemic has created an unprecedented global crisis, let us not forget that climate change and growing inequalities continue to shake the very foundations of business and of humanity. Now more than ever, business can and should play a central role in societal transformation,” said Ms. Ojiambo in her concluding remarks.

Speaking at the Africa plenary session on planting seeds for a climate-resilient Africa, Mrs. Rebecca Miano, Managing Director and CEO of KenGen PLC said, "Key players in the sector should ensure that electricity access is no longer a luxury, but a right. COVID-19  has brought about a new reality & awakened us to the fact that development & use of clean energy is no longer negotiable."

At the event, the UN Global Compact, in collaboration with DNV GL, released UN Global Compact 20th-Anniversary Progress Report: Uniting Business in the Decade of Action — an analysis of progress businesses have made in embedding the Ten Principles in their strategies and operations to align with the universal values of the UN, and in contributing to the 17 SDGs. Based on annual survey data supported by interviews with UN Global Compact participants, the report takes stock of how businesses are performing on critical sustainability topics. Broadly, the report finds that companies need to take more ambitious actions, at scale, to meet the objectives of the 2030 Agenda and create the world we want. For example, while 84 per cent of companies participating in the UN Global Compact are taking action on SDGs, only 46 per cent are embedding them into their core business and only 39 per cent have targets that are sufficiently ambitious, science-based and/or align with societal goals.

Together with Russell Reynolds Associates, the UN Global Compact also launched Leadership for the Decade of Action. The report sets out to discover what can be learned from business leaders who are integrating sustainability across strategy, operations and stakeholder engagement and what this means for how board and C-suite leaders are selected. It reveals an urgent need for transformational business leaders who look beyond near-term profits to make the long-term sustainability and resilience of our world a top business priority — both within and beyond their firms and broader ecosystems.

The UN Global Compact also released Introducing Business Benchmarks for the Decade of Action, featuring an initial set of best practice business benchmarks to gauge whether corporate activities are aiming at the necessary level of ambition to deliver on the SDGs. The announcement comes as part of the SDG Ambition initiative, a partnership with Accenture and SAP, which aims to enable the world’s leading companies to embrace ambitious targets and advance the integration of the SDGs into core business management, business processes and information technology landscapes.

As part of these efforts to call for more ambitious action across the SDGs, speakers at the Leaders Summit called for companies to take specific action across a range of issue areas, including on gender equality, with Manny Chirico, Chairman and Chief Executive Officer of PVH Corp., announcing the company’s patron support for Target Gender Equality which will support participants on their journey to achieve gender balance in business leadership.

○ Leadership for the Decade of Action: A United Nations Global Compact – Russell Reynolds Associates study on the characteristics of sustainable business leaders

○ Introducing Business Benchmarks for the Decade of Action, part of the SDG Ambition initiative

About the United Nations Global Compact
As a special initiative of the UN Secretary-General, the United Nations Global Compact is a call to companies everywhere to align their operations and strategies with ten universal principles in the areas of human rights, labour, environment and anti-corruption. Launched in 2000, the mandate of the UN Global Compact is to guide and support the global business community in advancing UN goals and values through responsible corporate practices. With more than 10,000 companies and 3,000 non-business signatories based in over 160 countries, and more than 60 Local Networks, it is the largest corporate sustainability initiative in the world.
For more information, follow @globalcompact on social media and visit our website at unglobalcompact.org